I recently replaced my dual 22" screens with a dual 24". Ironically, the screens took up about the same space because the bevels were much smaller. It may be the biggest reason I choose to go with the Dell UltraSharp U2414H.

The previous screens had no hdmi, only dvi. These screens only have one mini display port and two hdmi ports. This is when I discovered that my video card doesn't actually have two hdmi ports, but only one hdmi and one display port. Happy coincidence because I was under the impression I only had two hdmi's :)

The screens have a very small plastic border. I'd say 1mm or 2mm. But the screen itself also has a dead border. I guess the total amounts to the 6mm as advertised, although I'd say it's more like 1cm (10mm). It's still pretty slim but at first the tiny plastic border makes it seem like less than it actually is. The space is actually more apparent when you put two screens next to each other, putting a 15-20mm gap between the screens at best. There's also no way to properly "lock them" to one another, meaning I had to duck-tape them together. I'm not kidding. Would be nice if there was some kind of strap, or it would come with such, that could latch the screens together. 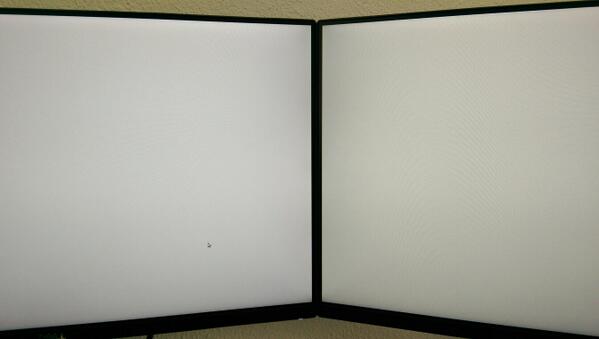 I also discovered that hdmi/dp is actually more of a curse than a blessing, at least compared to DVI. Whenever I turn off one of the screens, or switch the input to another computer, the computer (I run ubuntu) goes into a frenzy and compensates for the missing screen. Screen auto-detection and auto-adjustment is actually something you can't turn off in Ubuntu, turns out. So I'm stuck with this problem because that's the way hdmi works, I suppose the same goes for (m)DP. This is annoying because I want to have a dual pc setup, meaning I'd switch a lot between the two computers. And while the input part is taken care of by the monitors, the constant turning on and off of my monitors puts moves all the windows to one monitor or the other which is highly, highly annoying to my workflow.

The screen controls are flat buttons in the bottom-right corner, with a touch-like interface. There's no feedback other than obviously something happening on screen. You can setup a key touch tone though. I turned on the key tone because I got very frustrated with whether or not the monitor had registered my touch. In fact, when switching inputs or losing the active hdmi connection, the screen starts to reconnect or whatever during which period it simply won't respond to button presses. The key tones are very helpful in this because it will only beep when it acknowledged a button touch so you won't have to guess whether the touch was registered. That means you won't have to keep pressing until it gives a visual cue, which at first caused me to turn a monitor of and on again a bunch of times. Meh.

Switching inputs is actually not that bad once you set it up. You can setup the default action for two of the four menu buttons and you can set them such that the screen switches to a predetermined input channel. That's nice because it allows me to quickly switch between one computer and the other, barring the hdmi/dp delay of course.

The other problem I've been seeing is probably ubuntu specific. While the screens are generally recognized perfectly, every now and then (especially when recovering from suspend/reboot) one of the screens is not recognized and defaults to a 640x480 mode. This is when I discovered Ubuntu is actually incapable of working in this resolution anymore, putting the confirm buttons out of reach, making it highly problematic to switch resolutions. Though, it won't allow you to gear up to any higher resolution so I suppose the button's place is moot anyways. I think this is a problem with the display-port rather than the hdmi, but I'm not sure yet.

Still, once wall mounted I'm fairly happy with the screens. They do deliver a good visual experience and despite the buttons sometimes being unresponsive, the audio cue helps tremendously and being able to setup quick-buttons to switch input is, all things considered, still a very welcome option for me.

I'm gonna experiment with putting up an hdmi hub to try and keep the connection alive, preventing Ubuntu from detecting a switch, hopefully keeping the experience more consistent. And otherwise maybe I can break X and disable the screen detection thing somehow. Man, screw this hdmi shit and give me back dvi :/

Disclaimer: I was not paid (or even approached in any way) for this article. Though I suppose paid articles would tend paint a more positive picture anyways ;)